New physiologic findings from our lab and the research of other scientists indicate that important biomarkers of epileptic networks exist at the submilimeter scale that are not recorded by standard clinical electrodes. There is a growing consensus that therapy for patients with epilepsy could be substantially improved by making use of high- resolution electrophysiology, both for epilepsy surgery and for implantable diagnostic and therapeutic devices. Together with our team of collaborators (including John Rogers at the University of Illinois, Jonathan Viventi at NYU/Poly, and Jeff Carbeck of MC10) we are creating technology capable of recording high-resolution activity from clinically relevant areas. The platform of this new generation of electrodes is composed of active, flexible, conformable and multiplexed electronics.

Standard brain implants are limited to a small number of electrode contacts, as grid implants required for broader coverage can cause substantial swelling and injury due to their thickness and size. They also poorly conform to the brain’s irregular geometry. Our new technology eliminates these constraints. With active electronics: amplifiers, multiplexing circuitry, sensors and stimulating electronics placed together, right at the tissue surface, many thousands of small electrodes become possible in a very thin device that can conform extremely well to tissue. At this point in time our group has developed flexible arrays of multiplexed electrodes based upon silicon nanoribbon electronics. We have demonstrated proof of principle translation to the clinical-scale with in-vivo recordings from active, flexible arrays of up to 360 contacts that bring amplifiers and multiplexing circuitry directly to the tissue-electrode interface. This technology continues to be tested and refined in animal models. 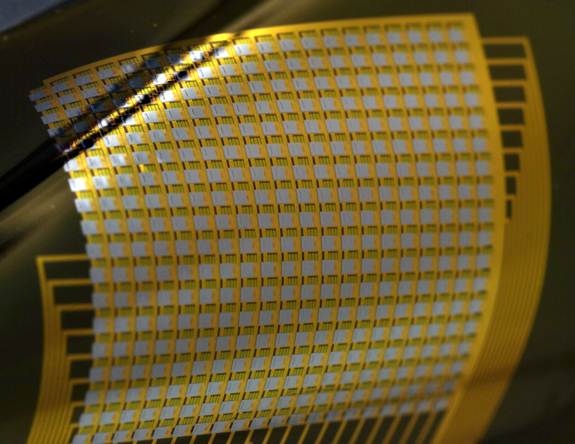 High-resolution, flexible, active electrode array with 360 amplified and multiplexed electrodes. Only 39 wires are needed to sample from all of the 360 electrodes simultaneously. The electrode array is ultrathin and flexible, allowing close contact with the brain and high-resolution recordings of seizures. (Photo Credit: Travis Ross and Yun Soung Kim, University of Illinois at Urbana-Champaign) 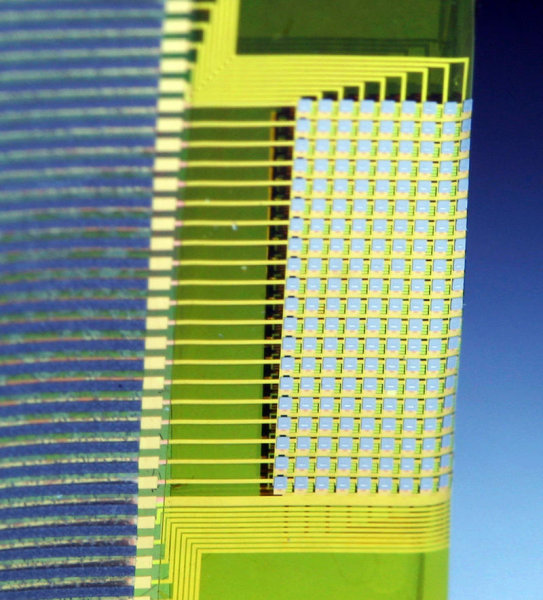 The extreme flexibility of the device allowed it to be folded in half without damage, forming a unique double-sided recording device.  This device can be used to interface with rarely explored brain regions, such as the interior of sulci and in-between the brain hemispheres. (Photo Credit: Yun Soung Kim, University of Illinois at Urbana-Champaign)

Our lab is also innovating in the creation of transparent, flexible neural electrode technology based on graphene, which because of its transparency allows optical imaging and electrophysiological data to be recorded simultaneously from the same microcircuit. Our innovative technology produces results at very high spatial and temporal resolution, described in Nature Communications (Kuzum, D. et al., 2014). Previously, optical and electrophysiological data could only be recorded separately, because standard microelectrodes are metallic and opaque, inherently concealing parts of the implantation area and creating artifacts. The sensitive, biocompatible, transparent graphene electrodes are able to record elusive high-frequency bursting activity and slow synaptic potentials, producing unusually high quality data. Graphene electrodes would also offer interesting applications in other areas of medicine, such as cardiology, where electrical information is being recorded. 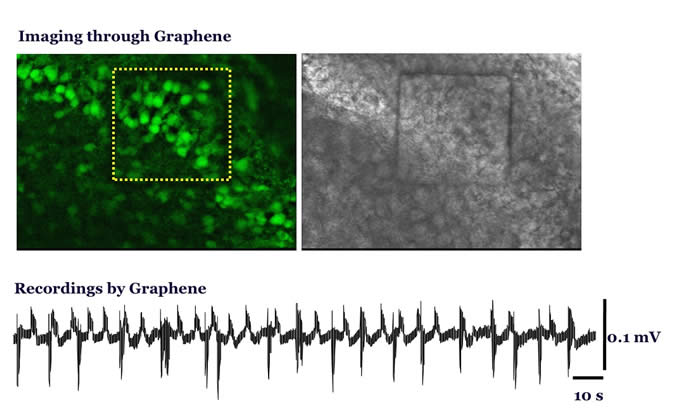